Introduction to Birdwatching in Thailand

Introduction to Birdwatching in Thailand

Thailand situated in South-east Asia, the Indo Chinese peninsula of the Oriental Region and has been described as a “zoogeographic crossroads'” because the country’s avifauna comprises Sino-Himalayan, Indo-Burmese, Indo-Chinese and Sundaic elements and large number of migrant visitors from the Palaearctic Region. There are approximately 1,012 species (BCST – Mar 2012) at present or 10% of the world species are recorded in Thailand.

Thailand has a tropical monsonnal climate. Generally dry season is during November to April and the rainy season from May to October but, the far south and South-eastern provinces receive rain during November – January. 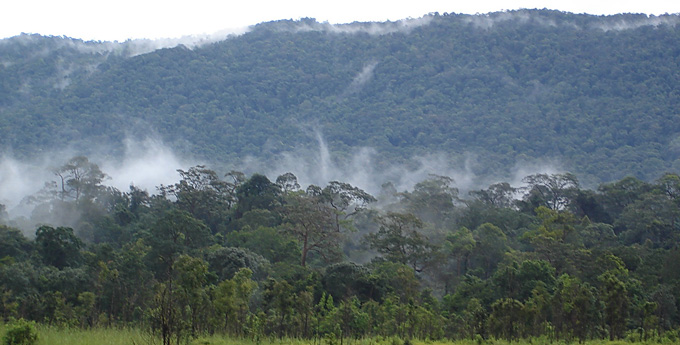 can be divided as follows :

The Central Plain extends the coast around Bangkok, consists the areas of marshy, floodplains.

The North lying between the Mekong and Salween Rivers, mainly mountainous, the highest peak at Doi Inthanon is 2565 M above sea level.

The Northeast consists of dry plateau (Korat Plateau) mostly consisting of dry soil but there are some good forest such as at Khao Yai National Park.

The East and Southeast has the isolated mountains of Khao Soi Dao at the westward part of the country near the Cambodia border.

The West and Southwest has a largest forested area and is divided from the Burmese border by the Tanassarim range.

The South lying between Andaman sea and the Gult of Thailand. Peninsular Thailand is the southern part, which is a part of Sunda faunal sub-region. 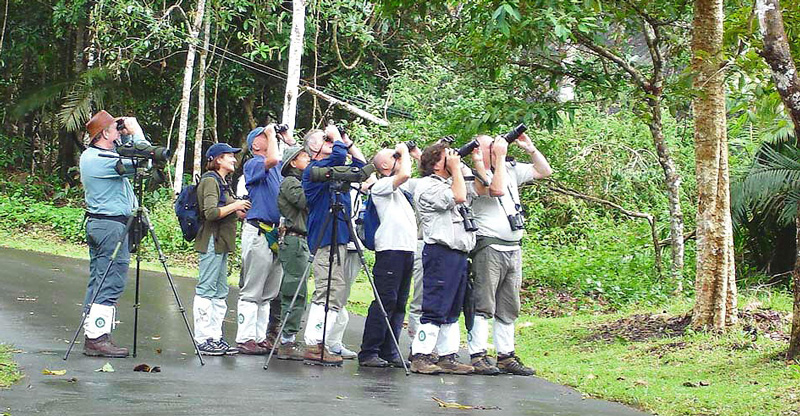 Tropical rain forest is dense, continuous canopy has a middle storey and a herbaceous forest floor etc. In Thailand it can be divided into two subtypes; the Thai type of rainforest, which formerly occupied most the lowland of Thailand and the Malayan rainforest type which is confined to the provinces of Yala, Narathiwat and southern Trang. Small areas of rainforest are also found in the wettest areas of South-east Thailand. Bird species diversity in this forest type is very high.

Thailand has a variation types of forest as follows :

Semi-evergreen and dry-evergreen forest are dense and stratified and usually has a deciduous component, these occur in the lowland and submontane slope below 900 m throughout the country. This forest type also supports a great diversity of bird species including pheasants, pigeons, cuckoos, owls, trogons, hornbills, kingfishers, barbets, woodpeckers and many passerine families.

Hill evergreen forest occur above 900 m or 1,000 m on the higher peaks thoughout the country especially the north, west, some in the Southeast and Peninsula. Dominant trees are oaks and chestnuts etc. This type of forest supports a great diversity of birds including minivets, bulbuls and is specially good for Rufous-throated Partridge, Hume’s Pheasant and Rufous-throated Hornbill etc.

DECIDUOUS FORESTS are found in the lowlands where the rainfall is too seasonal to support evergreen forest.

Dry dipterocarp forests occur in all the lowland but the largest and least disturbed areas are found in the North and West. This supports a lower range of bird species than other forest types as there is less middle storey and under-storey vegetations. Among the smaller birds, Black-winged Cuckoo-Shrike, Goden-fronted Leafbird, Rufescent Prinia, Brown Prinia, Great Slaty Woodpecker, White-bellied Woodpecker, Lineated Barbet, Eurasian Jay, Blue Magpie and Rufous Treepie etc. are found in this type of forest.

Mixed deciduous forests occur in the plains or valleys and on hill slope to 1,000 m, they are found in the North, Northeast and Southwest regions. Teak is dominant in this forest type. The bird species show less diversity than lowland evergreen forests but it is ideal habitat for Black-headed Woodpecker, Rufous Treepie, Golden-fronted Leafbird, Banded Broadbill and Blue Pitta etc.

CONIFEROUS FORESTS occur on drier ridge and plateaus at elevation 400-1400 m in the North and Northeast regions. It supports a low diversity of bird species but is the habitat for Giant Nuthatch, Great Tit, Grey-headed Woodpecker, Greater Yellow-nape, Eurasian Jay and Grey Treepie etc.

FOREST ON LIMESTONE occur around the margins of the major mountain massifts. One species of forest birds, the Limestone Wren Babbler is confined to limestone habitats and is found in small areas of the North, Southwest and at the southwest margin of the Khorat Plateau in the Northest region. Other species relate to this area including Dusky Crag Martin, Red-rumped Swallow and Peregrine Falcon etc.

BAMBOO occurs as a mosaic with other forest habitats and a great many bird species utilise bamboo including White-browed Piculet, Rufous Warbler and Pin-tailed Parrotfinch etc.

FRESHWATER SWAMP FOREST Some small areas of secondary, scrub forest remain in Peninsular Thailand in Pa Phru of Narathiwat Province, in the far south. No species of birds are restricted to swamp forest but some species such as Cinnamon-headed Pegeion, Large Green Pigeon, Red-crowned Barbet, and Fluffy-backed Tit-Babbler utilise this type of forst.

More than 20 years ago a group of foreign birdwatchers and some Thais led by Dr. Boonsong Lekagul found a birdwatching group called the Bangkok Bird Club. The BBC has developed its activities and becomes the Bird Conservation Society of Thailand (BCST- www.bcst.or.th). The activity has been spreading to other NGOs, private organizations such as other bird clubs, bird tours or individuals and, in less than 10 years, birdwatching has become popular pastime among Thais (both men and women).

Birding spots and when to observe 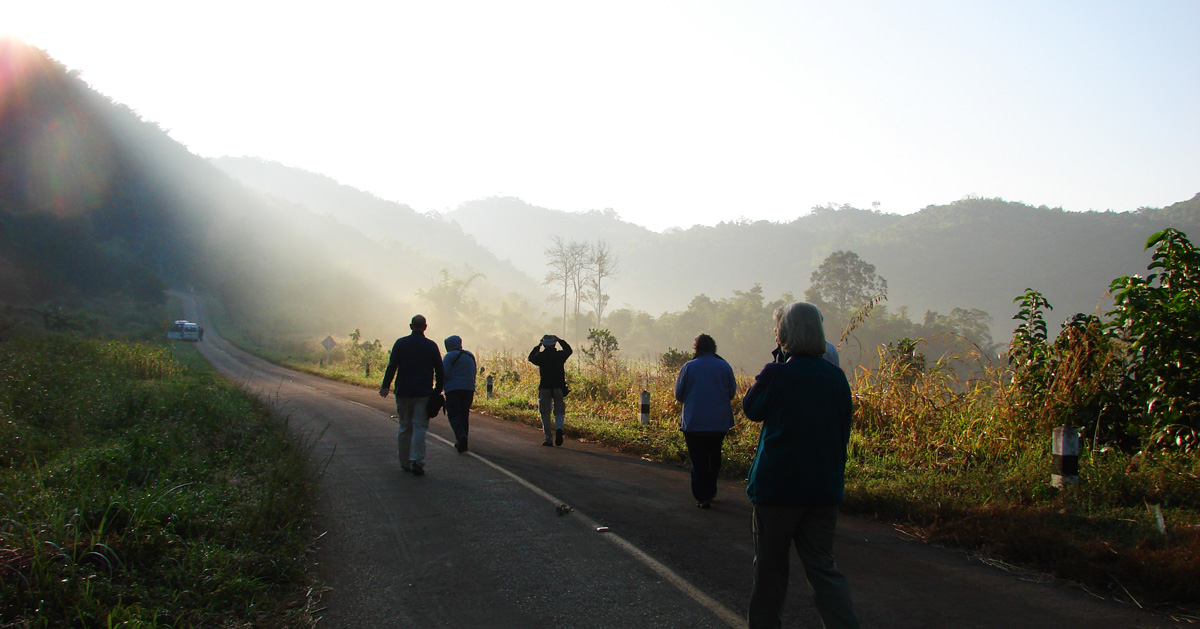 There are about 96 National Parks, 48 Wildlife Sanctuaries and a numbers of Non-Hunting areas, Watershed Reserves, Forest Parks and Biosphere Reserves that have been protected by law. These areas are the main birding spots located all over the country where birds can be seen all year round.

November-February is the peak time for migrating species, most areas are good for birdwatching especially the north where the weather is cooler than other areas. One of the most popular spots is Khao Yai National Park located in the North-eastern part and other good sites that should be included are Mae Wong National Park in Kampangpetch provice and Bueng Boraphet, a large lake at Nakhonsawan province. The sites that are least known to foreign visitors but one of the good spots in North-eastern are Phu Khiew Wildlife Sanctuary in Chaiyapum province, Phu Luang Wildlife Sanctuary in Loei province and Nam Nao National Park in Petchaboon province.

March-June is the second best time for both passage migrants and resident species which are in their breeding period. Best areas are the West, South-west and the South.

July-October is the rainy season, the quiet time though but good for resident species, breeding visitors and, in the later part of this period, during August-October is good time for passage migrants

The best areas are in central plains or around Bangkok, Kampangsaen of Nakhon Pratom province and during September-October at the coastal areas near Bangkok such as Bangpu and Samutsakhon etc.

One or two field guides are widely used in Thailand, A Guide to the Birds of Thailand written by B. Lekagul and P. D. Round published in 1991 is very easy to use for field identification but has become very difficult to get  at the moment.

The newly published guidebook for Thailand and South-east Asia published in 2000, A Field Guide to the Birds of Thailandwritten by Craig Robson. This book has the updated information.

How to dress and what to bring 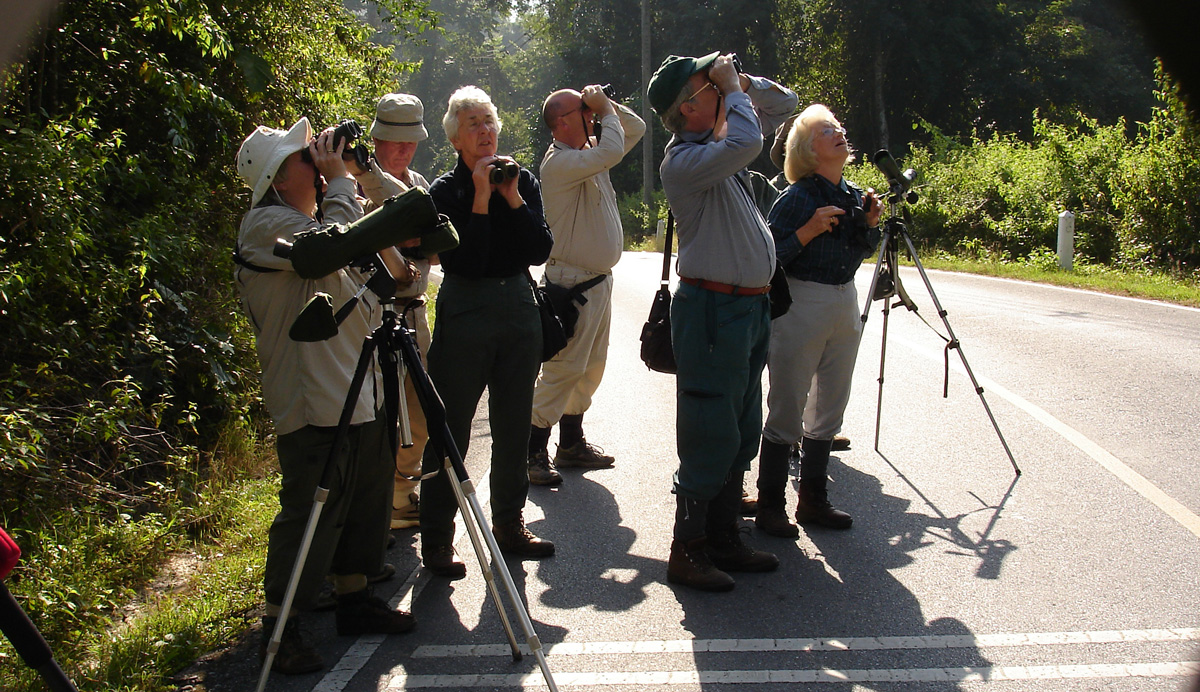 Wearing shorts for birdwatching in the tropical forest  is not advised because in some areas, there are lots of insects and thorny plants. Light cotton long-sleeved shirt and trouser are recommended for most areas during day time but some areas in the mountains during early mornings and evenings, can be cooler.  In the early mornings and evenings of Decemebr-January in the mountains of the North the weather can be very cold so sweater or jumper is needed.

Solid walking shoes are necessary as well as leech-proof socks which may needed in some areas, particularly during the rainy season.  Apart from a hat, a folded umbrella (dull colour) can be very useful either to protect you from bright sunshine or from rain. Insect repellent and torch are also advised.

All packages will be picked up in Bangkok except C1-4 Bang Pra/Khao Khieo be able to pick up in Pattaya as well.

All packages will be picked up in Chiangmai

All packages will be picked up in Krabi.